Domaine Le Sollier lies in the village of Monoblet in the foothills of the Cévennes National Park, with the twin Jumelles de Monoblet peaks rising up in the background. The Olivier family have been looking after this little corner of paradise since 1947.

Grapes used to be delivered to the local cooperative for vinification. That changed, however, when Nicolas Olivier joined the estate in 2006, and made the first moves towards producing wine as an independent winery. Independence gave him the freedom to showcase the stunning terroir, and focus on making top-quality wines.

In 2010, following large-scale expansion, younger brother Thomas joined the family estate. As well as working in the vineyard, he helped to run the business, and played an important role in building up an effective sales network.

Organic agriculture was introduced in 2006, although the estate was not officially certified until 2015. It seemed a natural thing to do, given the Domaine’s enviable location: its altitude and proximity to the Cévennes mountains provide naturally cool conditions which protect the vineyards, where the family can spend up to 400 hours tending the vines and caring for the soil. Because as we know, good wine starts with good grapes. 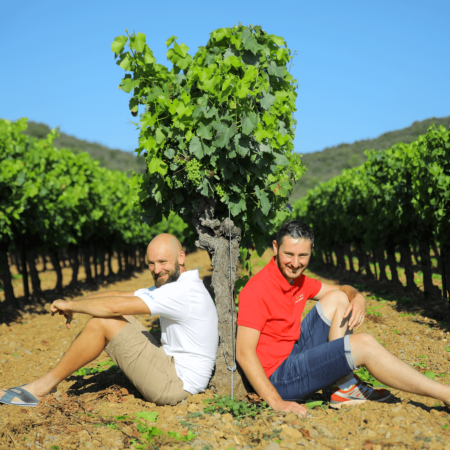 Les Linthes is a blend of 80% Syrah and 20% old-vine Grenache. Grapes are picked by hand, and the wine is barrel-aged for 12 months before bottling.

Aromas are of pepper and spice, alongside classic cassis notes from the Syrah. Flavours include cherries and berries (notably blueberries) and the palate shows excellent length. Les Linthes makes a delicious match for honey-glazed duck breast.